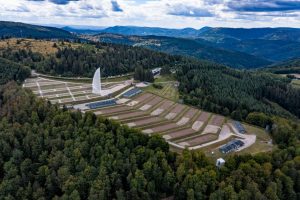 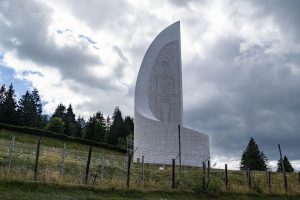 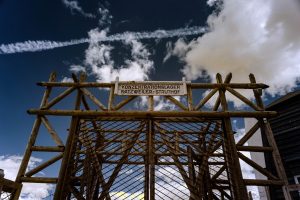 The front gate to the main camp (infrared)

The front gate to the main camp 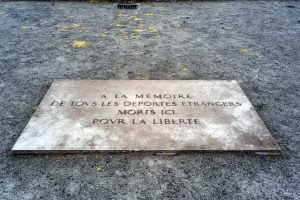 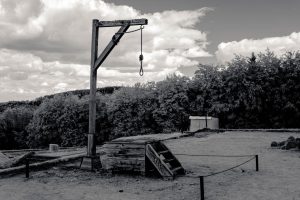 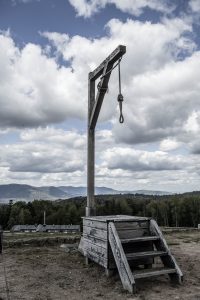 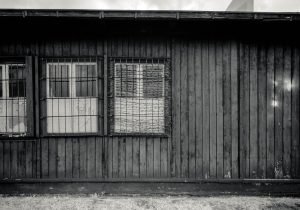 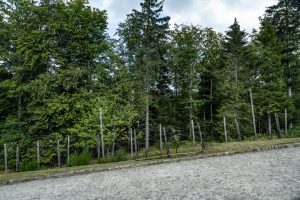 The walkway was where prisoners would be marched. If you stepped on to the grass you were shot on sight. In some cases, if there was a conflict between two prisonners, one could be tripped into the grass to end the conflict 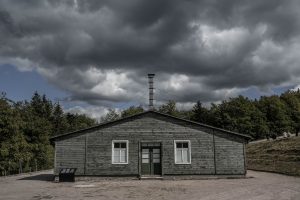 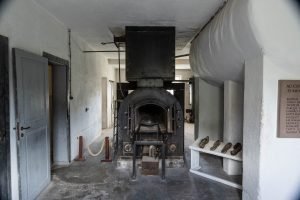 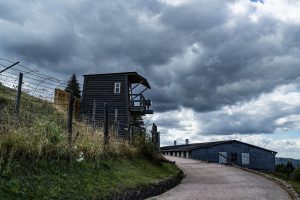 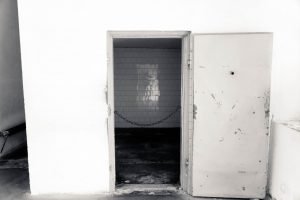 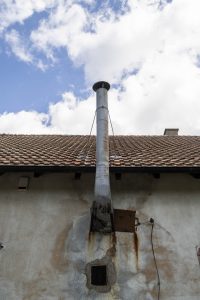 Vent from the Gas chamber

I first visited the Natzweiler-Struthof (KZ Struthof) concentration camp during a school trip in 1994 or 1995. I was thirteen or fourteen then.

“KZ Struthof” served as the main concentration camp of a network of camps and forced labor sites in eastern France and Western Germany. Opened in 1941 and liberated in 1944, it is estimated that 52,000 persons were interned during the camps operations. Of these, 22,000 are estimated to have died in that period.

Mainly used as a camp for political prisoners, members of various resistance networks across Nazi invaded countries were sent there first for hard labor, and eventually for execution. The camp was also used as a part of the regimes’ eugenics and military technology experiments. Persons considered sub-humans such as gypsies, homosexuals, Jews among others were also interned.

As a part of the Nazi effort to attempt to prove that Jews were sub-human, 115 Jewish prisoners were selected from Concentration Camp Auschwitz and transported to KZ Struthof, 86 survived the transfer (57 men, 29 women). Once there, they were well fed and considered in good health. With approval from SS Reichsfuhrer Heinrich Himmler, SS Major August Hirt had each of these individuals gassed. Their bodies were brought to the Reichsuniversität Straßburg, in the formerly French city of Strasbourg annexed into the Reich. They were to be used as a part of Jewish Skeleton Collection to be studied in their attempt to prove that Jews were “Untermenschen”, sub-humans. The collection was never completed as the war came closer to Strasbourg, the bodies were left in various states (some whole, some dissected) and discovered when Strasbourg was liberated.

Here are their names:

I remember my first visit to the museum, from what I recall, our class were the only visitors that day. We toured the area, and I remember snippets of the trip. I don’t recall the understanding the full weight of what had happened there until later.

The second time I was there, I was with my mother and father. My Father was born in Strasbourg 25 miles to the east of KZ Struthof. Shortly after his birth, my grandmother and her children fled to the Jura region while my grandfather stayed behind to fight the Nazis. He was imprisoned by the Nazis but escaped.

The camp had a new visitor center which housed some exhibits as well as materials to give more context to the site. When I visited as a child, there was no context, no stories told or photos to explain the collective madness that had happened here. The weight of what had happened here started to be felt, reminding him of a hard period of his life, my father asked if he could go back to the car while I continued into the camp. While there there was a bookstore where I saw a book I hadn’t seen since my childhood in Brooklyn, “Maus” by Art Spiegelman, a graphic novel where Art told the stories of his father through the war and experiences in a concentration camp. Maus I & II are books I strongly recommend.

Less than half a mile away from the main camp is a small collection of buildings that was hotel before the war, serving guests that came in the winter to ski. One of the buildings was transformed into an experimentation center with a gas chamber. Tests on phosphene gasses were undertaken on common-law prisonners, homosexuals and gypsies during which several died. This chamber was later used by the Camp Chief Josef Kramer to personally execute the 86 Jewish prisoners chosen to be a part of the Skeleton Collection. Ultimately Josef Kramer was promoted to head the Auschwitz camp.

Very few things are more sobering than walking through the main gate at KZ Struthof. The camp itself is secluded and built in the middle of a forest on a mountain side.  The gate itself, made of wood, barbed wire and high voltage electrical fencing was mostly a one way corridor that few who went through hoped would return. Of the original 28 buildings, only four remain, two of which are replicas (neo-nazi white supremacists burned parts of the camp down in 1974).

Walking past the two replica barracks, you fall upon a gallows that was used to execute prisoners. Near the base of the gallows, a cement plaque with a dedication: “To the Foreigners who died here in the name of Freedom” (translated).

Walking down the slope you enter a building with a long chimney. Inside you find a building whose layout best resembles an old schoolhouse, though on on the east end of the building is something found in no school. A crematorium, an oven to burn humans. Still in its place, a black stretcher like loading instrument to feed bodies into the oven. A plaque on the wall commemorating the 106 french resistance fighters who were executed on the night of September 1st, 1944. They were considered by the Nazi regime to be “Nacht und Nebel”, Night and Fog, to be disappeared without trace. Instead of releasing them with the advance of the allies, they were taken from another camp close to KZ Struthof in truckloads every two hours until none remained. Only after the camp was liberated, witness statements from other prisoners and forensic evidence allowed the allies to find out what happened to them.

These are their names:

As humans, we often chose to rationalize events in relative terms, it is a way of simplifying the complex and overwhelming, and often it works. Josef Stalin is later quoted as saying “One death is a tragedy, a million deaths a statistic.”, we can deal with hundreds of thousands of deaths, millions even, one death can become a martyr. In 1944, a Parisian doctor, Marcel André Henri Félix Petiot was arrested after 27 bodies were found in his basement, Petitot, was in fact a Serial Killer and the news of these 27 deaths made headlines around Europe, still in the thralls of war. From Paris, to Berlin to Copenhangen, people were aghast at the horrors discovered in a Paris basement, while the world around them was on fire. Compounding the tragedy was the revelation that the actual death toll was probably quite higher and the victims were Jewish refugees to whom Petitot lured them with promise of safe passage to South America, before murdering them. He was found guilty and beheaded by Guillotine in May of 1946.

The tragedy of one death, is something in itself too much to bear. In today’s modern world where everything is data and the essence of life quantified, we cannot quantify pain, there are no units of pain. We deal, largely through relativism. I am writing this letter in middle of the 2020 Covid-19 Pandemic. Around the world people are suffering immensely, either through loss of a loved one, or loss of livelihood. The pain of each is different, and in relative terms losing one’s livelihood is nowhere near as tragic as losing a parent, sibling or a friend. That does not mean that other losses should not be mourned, relativism isn’t necessarily the answer. The pain from our individual losses do matter, they are added to the pain of others, the only way to cope with the immensity of the collective pain is to collectively deal with it.

I am not a religious man, there are however some teachings that have merit. In the Jewish faith, it is generally considered that when one person destroys a life, a world is destroyed, and conversely, when one life is saved, the world is saved. Far from being a scholar of the Talmud, it is my belief that we cannot forget that behind each number, each statistic, the death count is not a simple statistic, but rather a painfully long sum of 1+1+1+1+1+1+1….., with each 1 representing an entire world. It falls upon us, those not yet included in that sum, to put an end to the addition and to remember the worlds lost and celebrate the worlds saved.

In 2019, 15,348 German cars were sold in Israel, Germany is Israel’s 8th largest trading partner having bought 4.5 billion euro worth of goods. Over 50% of cars sold in Hawaii are Japanese.

Justice is how we as humans learn to live with each other. At a basic level it forms the foundation for many belief structures from Christianity, Islam to Hinduism. Do good and you will go to heaven, bad and hell awaits, the concept of Karma has transcended beyond its religious origins to become a shorthand for universal justice. A cosmic feedback loop to make sure that we do the right thing when we have a choice. We come to expect that those who do harm others will be dealt with. Religion in a modern context does not have the power to deliver righteous retribution as long as they are alive, a legal justice system is expected to handle them until their passing into the next realm.

We expect people that harm to be stopped and punished for their actions. Justice is necessary, forgiveness is optional. It is difficult to ask a people to forgive if the injustices of the past have not been dealt with. Germany paid a price for their ethnic conquest, and will continue to pay in the form of remembrance. War crimes tribunals were held, many perpetrators were hung or shot, some escaped. I don’t know how to quantify forgiveness, but over fifteen thousand German cars were sold in Israel in 2019 and Germany is Israel’s 8th largest trading partner having bough 4.5 billion euros worth of goods. As new generations grow, they can build upon justice served to forgive and move forward. In Hawaii, where Japan attacked the United States bringing the US into World War II, over 50% of cars sold are Japanese and Japanese tourists spent over 2 billion on the islands in 2018. From 1942 to 1945, the United States operated a network of internment camps. I visited Manzanar, one of the camps a few years ago. While the scope of harm was nowhere near what was perpetrated in Germany and other places, it remains a harsh past that hasn’t been fully dealt with.

Whereas KZ Struthof has clearly been maintained, even rebuilt in places, Manzanar seems to be falling in disrepair, not only materially, but also somewhat forgotten in the common American Psyche. A lot of effort is undertaken in Europe to address its bloody history, to remind people of the heavy price exerted on the continent for the follies of a “master race”. My first visit to KZ Struthof was on a school trip, a school 230 miles away, we were made to know, to remember. The common view of the US in WWII was that of an absolute and benevolent victor, often forgotten as a footnote in history books are the internment camps. I only discovered Manzanar because I was looking for an abandoned runway to race my car. Visiting Manzanar for the first time, my heart sunk, and it was necessary as an American to understand what had happened here, American citizens deprived of their liberty based on their ethnicity. Many of the interned volunteered to fight for the flag that put them there, some dying in Europe fighting the Nazi Regime in the name of freedom.

It falls unto us to remember what had happened in places like KZ Struthof and Manzanar, of the harms done. While the harms done are not equal, they are relevant and devastating for those that fall victim to collective evils.