Working on an airport missions out of Shanghai, I’d often take weekend trips to relatively close locales to discover a little bit more of the world. I can’t exactly remember when I first heard of Jeju, a small semi-tropical island often described as South Korea’s Hawaii, it lies approximately 80 kilometers south of the Korean Peninsula. I booked a quick weekend round-trip as well as a driver to check it out. The most experience I had until then with South Korea was airport tourism while I was transferring planes in Seoul.

As the departure date approached, so did a tropical storm, ever the optimist I thought it would be fine, maybe a little turbulence on the flight over. My flight was cancelled, I managed to rebook it with the linguistic help from my Chinese colleagues. 24 hours later I was on a plane, I would have less than a day to discover what I could on this island.

The flight from Shanghai to Jeju was packed, lost standing room only. Jeju, being cut-off from the mainland has a different visa policy than the rest of Korea: Chinese citizens can visit Jeju without the need for a Visa. This policy has created a little cottage import/export industry (more on that later). Being late into the day I took a taxi to my hotel in the center of Jeju (Jeju City, the island is named Jeju as is the main city). The city was pretty much deserted with remnants of the tropical storm having just swept through. Taking a little stroll around, I started looking for a place to enjoy what we westerners call Korean barbecue (고기구이). I was wet, cold and tired, most everything was closed when I happened across a hole in the wall restaurant. It didn’t seem to be the type that catered to tourists as most people inside seemed to be regulars in their interactions with the staff. Having had some great Korean BBQ back in LA, this was a feast. As there was no English menu, I just resorted to my standard point to pictures and smile approach to ordering. The meats and small side dishes kept coming, there was a minimum order for two people on some of the dishes but they didn’t seem to care, it seemed as if they were eager to show off their cuisine. As usual, I was fat and happy when leaving. 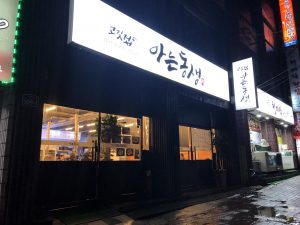 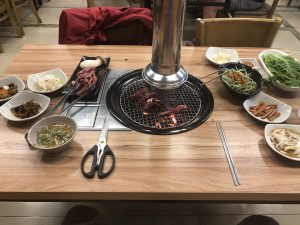 I came to Jeju without knowing much about the island, the sites to see or its history, the clock was ticking. I had arranged a driver, he picked me up at the hotel and we were off.

The first thing that is often described as the site to see in Jeju is actually under it, one of the world’s longest lava flow tunnels can be explored, Manjanggul Cave. It was a hot day, but descending into the cave, you were immediately cooled off and enjoying a leisurely stroll through remnants of volcanic activity. After having emerged from the lava flow we then headed towards Seongsan Ilchulbong, known as “Sunrise Peak” it really isn’t a peak, rather a bowl shaped extrusion from the seafloor. One could imagine a secluded world living inside the bowl  hundreds of feet above the sea floor. 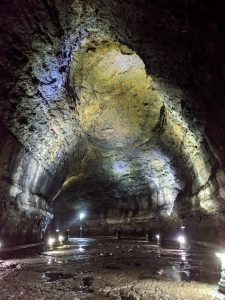 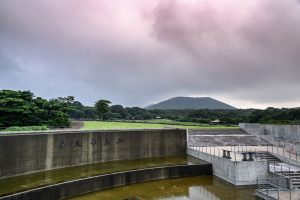 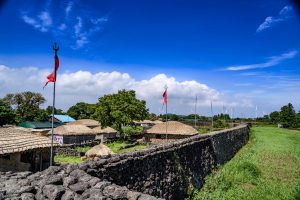 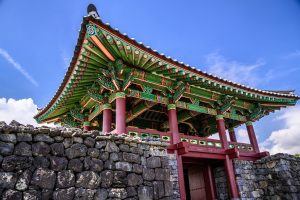 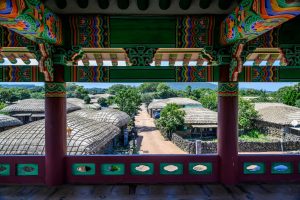 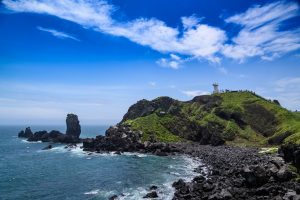 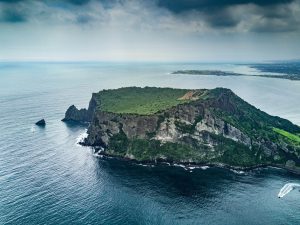 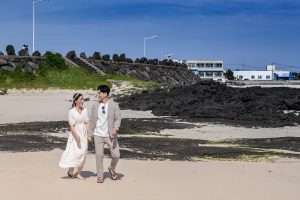 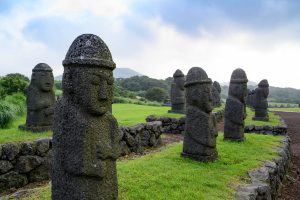 “I don’t like the Japanese” my driver said. Originally from the mainland, he worked in management for a large well-known American conglomerate before retiring in Jeju. He decided to drive to keep active, practice his English with foreigners he had grown accustomed to working with and to share the wonders of his adopted home. The discussion on Japan was part of a larger one on the history of Jeju and South Korea by extension. The tour of Jeju was not just a tour of sites, but as well as its History, or as least as much could be told during a day trip.

The timing of my trip coincided with a heightened dispute concerning reparations for acts committed by the Japanese in occupied Korea during World War II. As a westerner, an American in particular, it is very easy to assume that both countries which are allies are not only on-good terms but share a unique bond and as two of the few democracies in Asia. While both countries are long standing US allies and are showcase democracies in Asia, their 15 century long relationship adds layers of complexity rarely matched in the West. The second World War was the last conflict that saw these neighbors on opposite sides of a battle. Korea was invaded and annexed by Imperial Japan and numerous atrocities against civilians were committed. After the war, the Korean Peninsula was divided largely between the Soviet Union/China to the North and the United States/West to the South. As postwar Japan and South Korea developed, relations normalized and both countries became essential US allies in the area. The US maintains strong military presences in both counties. As South Korea’s economy continued to develop and catch-up to Japan’s, Korean brands like Samsung and Hyundai gained equal footing with older Japanese brands such as Sony and Toyota, the rivalries started to re-emerge. Many Koreans feel that the issue of Japanese repentance is still open whereas in Japan, the issue is largely considered to be closed through treaties and payments.

The very sad part is that on the face of it, the two countries are more similar than they are different to outsider. Both are thriving democracies, considered the most stable in Asia, both have strong export-oriented economies with household brand-names. Culturally compatible, with K-pop music being listened to by Tokyo’s youth and Japanese Anime being consumed by millennials in Seoul and both suffer demographically from aging populations. Both are faced with economic and security issues as China is becoming the dominant economic and military force in the area; both trade openly with China but also both are wary of Chinese expansion in to the South China Sea. As a westerner the most striking similarity between both is the shared use of washlets in restroom facilities, a level of civilizational development not yet attained in the West.

Like any relationship, there were better moments. In 2002, Korea and Japan jointly hosted the Soccer/Football World Cup, usually hosted by one nation, both nations worked together to pull off a great event and for a few weeks, they seemed to operate as one. The hope today, is that cooler heads will prevail and that both sides can see they have a lot more in common than they think, and that could be the basis of a win-win prosperity into the future.

We had lunch at a small restaurant in the middle of the country side. The owner was a friend of the driver, we were here to try the “Black Pig”, a delicacy from Jeju. It was good, I’m not enough of a meat connoisseur to say it was better than what I had the night before. 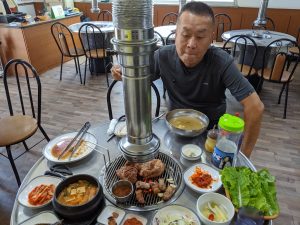 Going further back in Jeju’s history, it has always been an island in the middle, in between rival nations, often paying the price in lives for the whims of governments far away. Even without the outside human intervention, life on Jeju was difficult, land was mostly barren and men often died at sea during fishing expeditions. This left widows back on the island having to fend for themselves. So was born the Haenyo culture. Women have been diving off the coast of Jeju for centuries without the assistance of breathing apparatus’, feeding the family and fellow villagers with marine life such as abalone. The practice is slowly disappearing as the need to dive has been replaced with foods imported from the mainland or abroad. A museum commemorating the Haenyo is a worth a visit. 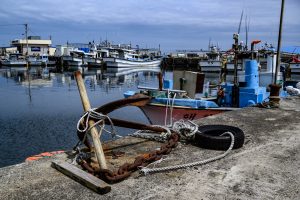 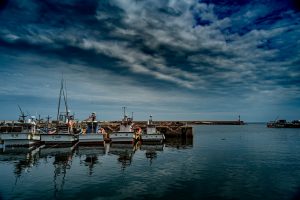 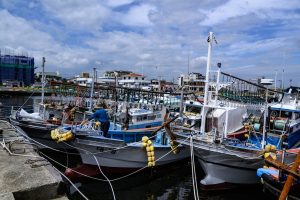 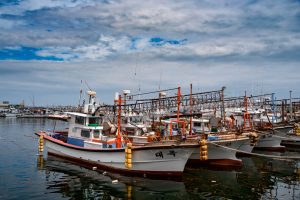 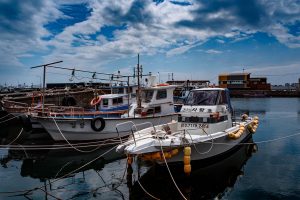 We finished the day back in Jeju city, at the main street market. A market with food and various products similar to other street markets found across Asia. The real draw was food stall row. Opening at 1700hrs precisely, I walked up and down the rows early to make my choice, you had to bet correctly as lines were forming, with eager diners waiting for caloric intake. I settled on a fusion sushi/egg/sausage stand. It looked good and did the job well enough, though in hindsight I should have chosen one of the more local fares they had. 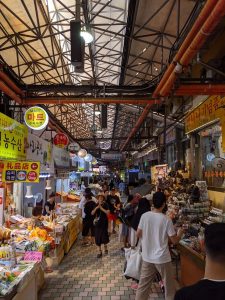 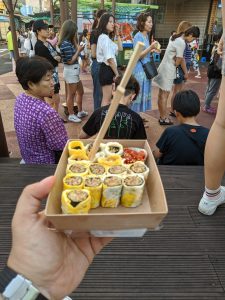 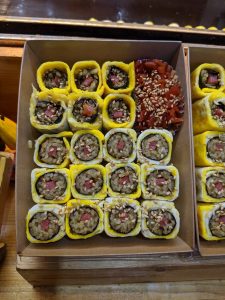 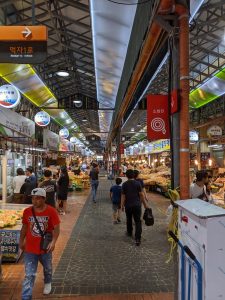 Jeju, being South Korea’s Hawaii attracts visitors from beyond its borders, most of which are from Japan and China (and the occasional ambiguous Caucasian like myself). Many Japanese businessmen come to Jeju not only for the great weather, but fantastic golf courses that cost a fraction of what it would a few hundred kilometers east back in Japan. With a very generous Visa policy for Chinese visitors (no Visa required for a tourist visit), many Chinese come to Jeju to experience a little of the life outside China but also to engage in a little travel capitalism. A short one and a half hour flight separates Jeju from Shanghai, mainland China’s economic capital. Many enterprising mainlanders pre-order items for duty-free pickup from Jeju airport, hop onto a cheap flight, once off the airplane, they do not leave the airport, head straight for departures and pickup their goods, strip all packaging and pack all their bounty into a bag for import back into China. The pickup counters for duty-free looked like an Amazon distribution warehouse, hundreds of people were either in line to pickup their products or were on the floor taking products out of packaging. Elaborate beauty product boxes, sometimes with velour insets and ribbons were strewn across the ground, airport staff dedicated to keep this cash machine rolling rolled around carts higher than themselves to pickup the refuse. It was as if Christmas was became a sad job, all the open presents, none of the joy. 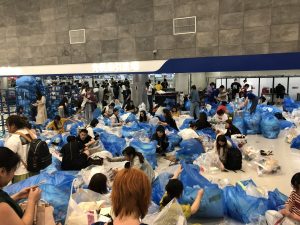 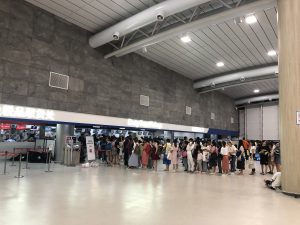 Once back in China, the goods are immediately shipped out via TaoBao (a similar service to eBay in China) to eager Chinese consumers. The duty-free products most sought after are not tobacco and alcohol, the sins of a decadent bourgeois west, but rather skin care products. South Korea is known in Asia for the high quality of their skin care products and their import into China is subject to very high tariffs, that is unless they are “artisanally” imported. Ony my return flight I managed to preboard by flashing a Frequent Flyer status card even though the airline wasn’t in my alliance. I’m glad I did since at general boarding it was an all out war to to place all the bounty into the overhead bins. I thought for sure China Customs would have a few words to say to the renegade importers of lotions and serums, but there were no customs; and skin across China was allowed to exfoliate.

"For the people of Jeju, a focus on dark patches of history can either perpetuate a “victim mentality” or serve “as a reminder of the need to work for peace and human rights issues on the premise of ‘never again.’" 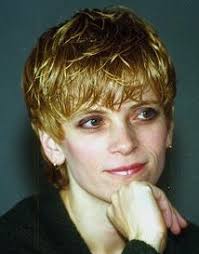