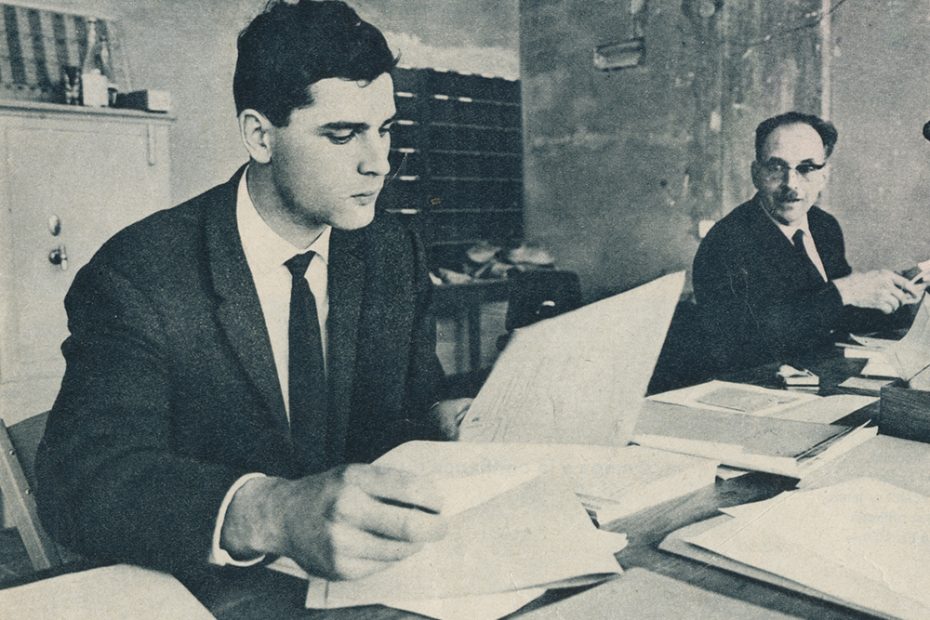 My father was 21, the United States was at the height of its empire, the new cultural capital and my father wanted to see it first hand.

My father was living in Strasbourg, France at the time and found out about a scholarship program that still exists today. The program: the Zellidja scholarship; would be awarded to “future leaders” who would submit a project to study something in their field of interest in a foreign country with a shoestring budget. Projects would be voted on by the committee of regional education academies of France (the public education system in France is broken into different “academies” that govern the educational system in their respective regions).

My Father submitted a project where he would study the US Car Industry over the course of a month. The academies saw the project, and then rejected it, deeming the allocated budget was too low to be feasible. Not completely satisfied with the concept of “no”, my father set out to prove them wrong. He wrote to airlines and ocean-liner companies stating his project, he received letters from the airlines stating that as IATA members, they were barred from using unqualified crew-members on flights.

With $60 in his pocket and a letter of rejection from the French Ministry of Culture, my dad took his bicycle and started riding to the United States. First stop, Luxembourg; at the time, Luxembourg was one of the few places non-IATA airlines could operate easily; charter airlines with a more relaxed view of labor practices. He needed free passage over the ocean or the trip would be over before it began. He made it about one hundred miles before he got tired of biking, ditched the bike on the side of the road and hitchhiked the rest of the way to the Grand Duchy of Luxembourg. All the airlines had their local offices in an administration building on the airport grounds, my father went door to door to each one, without much luck. He then stumbled upon a long corridor with a big door at the end with no name. He knocked on the door and heard “come-in”. Inside was a big office with a man behind an ornate desk a couple of chairs and a meeting table, the office was far oversized for what it contained.  The man looked at the little shit that just came in through the door. My father told him his story; the scholarship, the rejection from the academies, the rejection from the civilized airlines, the ditched bike and the hitchhike to the Duchy culminating to the present moment. The man behind the desk: “If you had told me any other story I would have thrown you out of this office, it is so incredible that I believe it, I will let you fly on one of my airplanes”. It was his first time on a plane, the flight route was Luxembourg, Reykjavik, Idlewild New York on a DC-4, state of the art then, still in service in Latin America on “routes” still not served by IATA airlines.

My dad had a tent, the tent was lost at the airport, he had made arrangements to spend his first night at the YMCA youth hostel on the upper west side of Manhattan. By the time he got there at 9pm they told him that he was too late, his room was given away and that they were fully booked. No room, no tent, he set out for Central Park. He thought about sleeping on a park bench but opted instead for cozy protection of big bush. It was a good decision, he was awoken at 2 in the morning by the police yelling at someone a few feet away who thought the bench was ideal, that man was sent on his way by New York’s finest. He fell back asleep but mosquitos got the better of him at 4 or 5 o’clock. He awoke to see the sunrise on the city, he still remembers the rumblings of the newspaper delivery trucks delivering the newspapers to the newsstands scattered around the city.

He did have the address of an exchange student, John Schwarz that they had received about a year earlier in Strasbourg. He found the place which overlooked Washington Square Park, John’s mother Hilda was in city government, possibly City Treasurer or Comptroller. Het was invited to stay over and that that night they were hosting a black tie formal dinner. My father, the day after spending his first night in the Americas in a bush in Central Park was now at an elegant table with city bankers and government officials. They started serving a dish that he had never seen before, corn on the cob. He had no idea how to proceed on how to eat it, so he started trying to cut it with a fork and knife, he heard a few snickers and and saw small smiles as other guests devoured their corn as if they were playing the harmonica

He soon left New York and hitchhiked to Cleveland where he had the address of a friend of his Father, the president of a local bank there. From there he took a bus to Detroit where the banker had arranged meetings with vice presidents from General Motors and Ford. After arriving in motor-city, he was being chauffeured around in Cadillacs and Lincolns that were the size of an aircraft-carrier. My father told the vice-presidents his story and they helped him out, the GM VP invited him to stay at his house and paid him to test out prototype vehicles, he also landscaped and did odd-jobs to help him pay for food and the bus ticket back to New York.

It was time to head back home, he planned on staying a month and ended up staying a month and half. He arrived at Idlewild airport (now JFK) just to find out that “Seven-seas Airlines”, the non-IATA airline that brought him into the US surreptitiously had gone bankrupt a few weeks prior. He knew the music, he went from airline office to airline office once again, this time so he could get back home, this time he could be considered a crew member since he served on the now defunct seven-seas airline. He stumbled upon a young spokeswoman for an Irish airline, she invited him to a Manhattan soirée. The next day after he woke up beside her, she said he was on the flight manifest as crew for the afternoon empty ferry flight to Dublin. In Dublin, with the Irish airline crew manifest in hand he approached the Captain of a KLM flight scheduled for Amsterdam Schiphol, started to tell his story. The captain said, “I’ll take you, on the condition that once we are up you tell me more”. Once airborne the pilot came back to the cabin leaving the first officer the yoke, and listened to the rest of my father’s story. Once in Amsterdam a passenger that overhead the Captain and my father speaking, offered to drive him to the Hague from which, he hitchhiked back home to Strasbourg.

He loved the United States and is grateful for all the opportunity that the people of this country provided. On paper the trip was a fool’s errand, his stubbornness, some friends and with plain old luck he pulled it off.

He would return to the United States, but not quite yet, within a few months he got a scholarship for a Pilot’s license, and then a draft letter join to the French Air Force in Algeria.